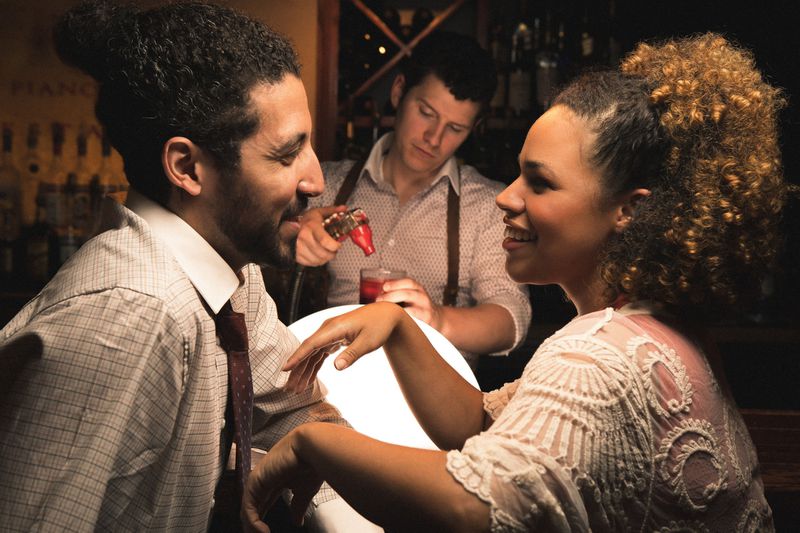 “I love new works,” Thielen declared. “I’m always looking for that next new work to help create new material for the canon.”

Heath Saunders plays Harry, a songwriter whose life appears to be a dream. “Harry is a charmer, first and foremost,” Saunders said. “He exudes life and vitality in a way that is almost dangerous.”

“Louise has got a big heart and big dreams but she’s not so sure of herself all the time,” said Katherine Thomas, who plays Harry’s girlfriend. “She’s in a little bit of denial about that, I think. She’s very serious about her job. She’s an actress.”

Louise is instantly attracted to Harry. “She is charmed by Harry from the start,” Thomas said. “There’s something about him that is electric to her. Falling for Harry incorporates some other things that she has to put up with but she wants to see it through.”

Nick Cosgrove plays Harry’s brother Paul, who he described as “incredibly protective and loyal to Harry. You get a sense of their playfulness — how they banter with each other and kind of push each other’s buttons. But, at the end of the day, they really do care about each other."

The cast members were all hesitant to offer additional details, fearing that they would reveal “spoilers” in this musical that combines humor with serious themes.

“The show sort of hinges on a gradual revealing of what’s going on,” Saunders explained. “The plot twist has a lot to do with what’s happening in the show as a whole.”

The actor did reveal that the musical is “this very personal, very human story that is the tracking of very, very real relationships and how they ebb and flow.”

Another main character is Harry’s Labrador, which is played by a marionette. “It’s an amazing little dog puppet,” Saunders said.

“I enjoy working on new works because of the collaboration,” Cosgrove said.

“I think Daniel (Zaitchik) did an amazing job with this story and with the music,” Thomas added. “It’s rare for me to find a musical where I truly enjoy the book scenes and the dialogue as much as I do with this one.” She is also enjoying the chance to work on a contemporary piece.

“I am very happy that I get to play piano in this show,” Saunders said. “I also really deeply enjoy this cast.”

The director and actors all praised the contributions of playwright Zaitchik, who has been attending rehearsals. “He’s been super helpful, talking about intentions and why he wrote the way he did,” Thielen said. “It’s nice to have him in the space to alter things and hear what the actors are saying.”

“It’s always great to do these big shows that have been previously done,” director Thielen concluded. “But to work on a new work and create a new roadmap for what kind of story this wants to be is very exciting.”